Released on the 20th of March 2018, a new-born adventure game set sail on an endless journey, 2 years later it has arguably become one of the most iconic Xbox Games right now, even arguable video games as a whole.

Sea of Thieves is included on the Xbox Game Pass, so if you wanted to try this out first before paying the full price, you can.

I, Max-Lang Orsini, will test the depths of the waters and bring you a full article breaking down why you should play Sea of Thieves.

What Makes Sea of Thieves Great

I’ll be here typing forever if I had to label every single thing, but I’ll name a few and leave the rest for you to set sail on the high seas, and make many memorable moments on the vast ocean that is the Sea of Thieves.

Treasure variants, you heard it here first. That’s right, you can not only be a classic pirate, and find yourselves many treasure chests by following treasure maps, but you can also fight the infamous skeletons that also sail the seas.

Defeated the captains to obtain a skull and sell this to the Order of the Souls reputation, or dig up treasure and sell to the Gold Hoarders, or even deliver cargo as part of the Merchant Alliance reputation!

With many treasure variants, many reputation variants will also exist, providing more challenges. If you are wanting more of a challenge, look at your ‘Commendations’ which are like achievements.

Arguably one of the most influential parts of this open-world pirate game. The intensive ship combat allows for suspense as you plunder your opponent’s ship with your crew members, stealing their treasure right before selling to the correct companies.

For a better PvP experience, there are different types of cannonballs for different effects! You can get the ‘Cursed Cannonballs’, which will have a different effect on which one you’re using. Make your opponent anchor in the middle of the ocean, prevent them from shooting you, or even make them wobble around on their deck drunk! It’s a lot of fun.

Not just that, you can get ‘Chainballs’. Hitting a precise shot on the ship’s mast will destroy it, making it fall down and disabling them from moving! You can even use ‘Fire Bombs’ to put the enemy’s ship in a blaze! 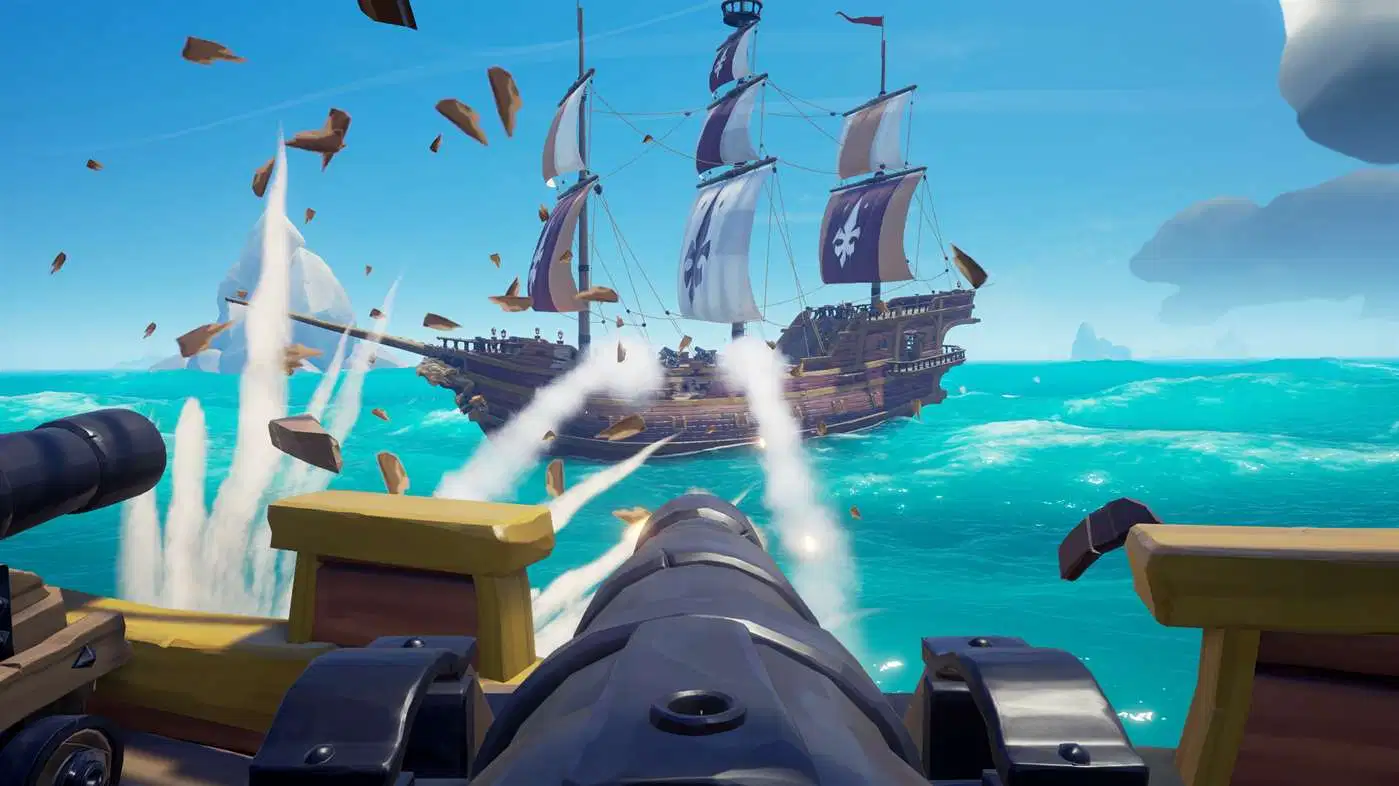 Maybe you like to be up close and personal, and that’s fine too! Board the enemy’s ship and attack them with a tense sword battle before switching to a pistol for a final blow! These moments are by far the tensest. Remember by killing one player, there are fewer players to control their own ship!

Perhaps you want to be friendly, and that is also fine, as long as the other crew agrees! These memorable moments are the best when you all get drunk in the tavern together and play musical instruments as the sun falls down! Don’t get too drunk, or your instrument may be out of tune…

The most infamous name you can make for yourself on the seas is the title ‘Pirate Legend’. These are the most experienced players that have fought for their title with many wins under their belt. If you ever come across these ‘Pirate Legends’ for yourself, fear is the first thing you should feel.

A category that is FULL of content. For a game that has been out for 2 years, it leads to endless possibilities and laughs on your journeys.

If you don’t fancy fighting a player ship, or perhaps you haven’t come across one, you can fight the skeletons on the seas too! These skeleton ships will appear randomly sailing the seas on their own adventure or sailing amongst a fleet, it is up to you if you want to disturb them.

Or perhaps you don’t want to fight any enemy ships at all, and that is fine too. You may come across the Megalodon. A big shark that can tear through your ship comes in many variants, the white Megalodon “The Shrouded Ghost” being the rarest. Some say it does not exist, but if you kill this thing, you will be among the few that has lived to tell the tale.

Is this not enough? Well no matter if it isn’t, there is still so much more. Fight the newly added Ghost ships from an undead fleet under the Flameheart name, fight the Kraken for its meat and sell it to Hunter’s Call reputation for some sweet gold, and even participate in islands dedicated to the skeletons known as the ‘Skeleton Fort’. Completing this will reward you inexpensive goods across many reputation companies! 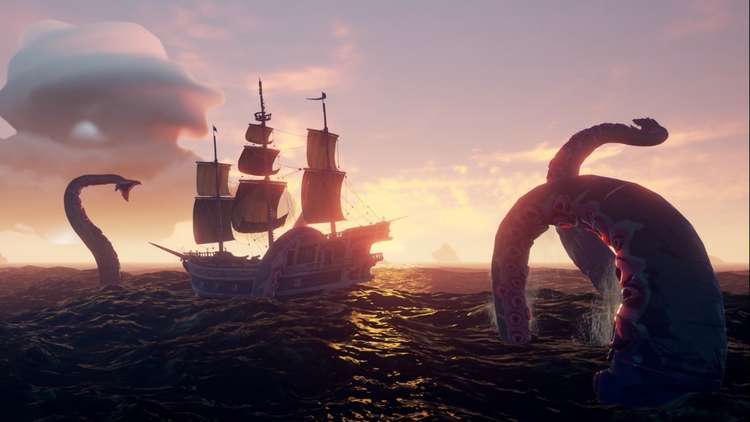 No matter if you’re a single player because there are special stories that you can complete. Learn the stories of other ships and fleets and how their demise was met, help recover other crew members in an exciting story known as the ‘Tall Tales’. Perhaps you don’t want to do this solo and with friends in an adventurous multiplayer game, that is possible too.

You can even set sail on your own adventure, peacefully digging up treasure, but be aware of those pesky pirates that will come and steal your loot!

The Beauty of Sea of Thieves

Moving on from all of this pirate ship stuff, throughout my entire time playing this game, I’ve got to admit it’s beauty. The graphics are quite intense, so if you’re on PC you will need a good system, but it is definitely worth it. The views and scenery all blend to create this masterpiece of graphics and is by far one of the most beautiful games I’ve ever played. 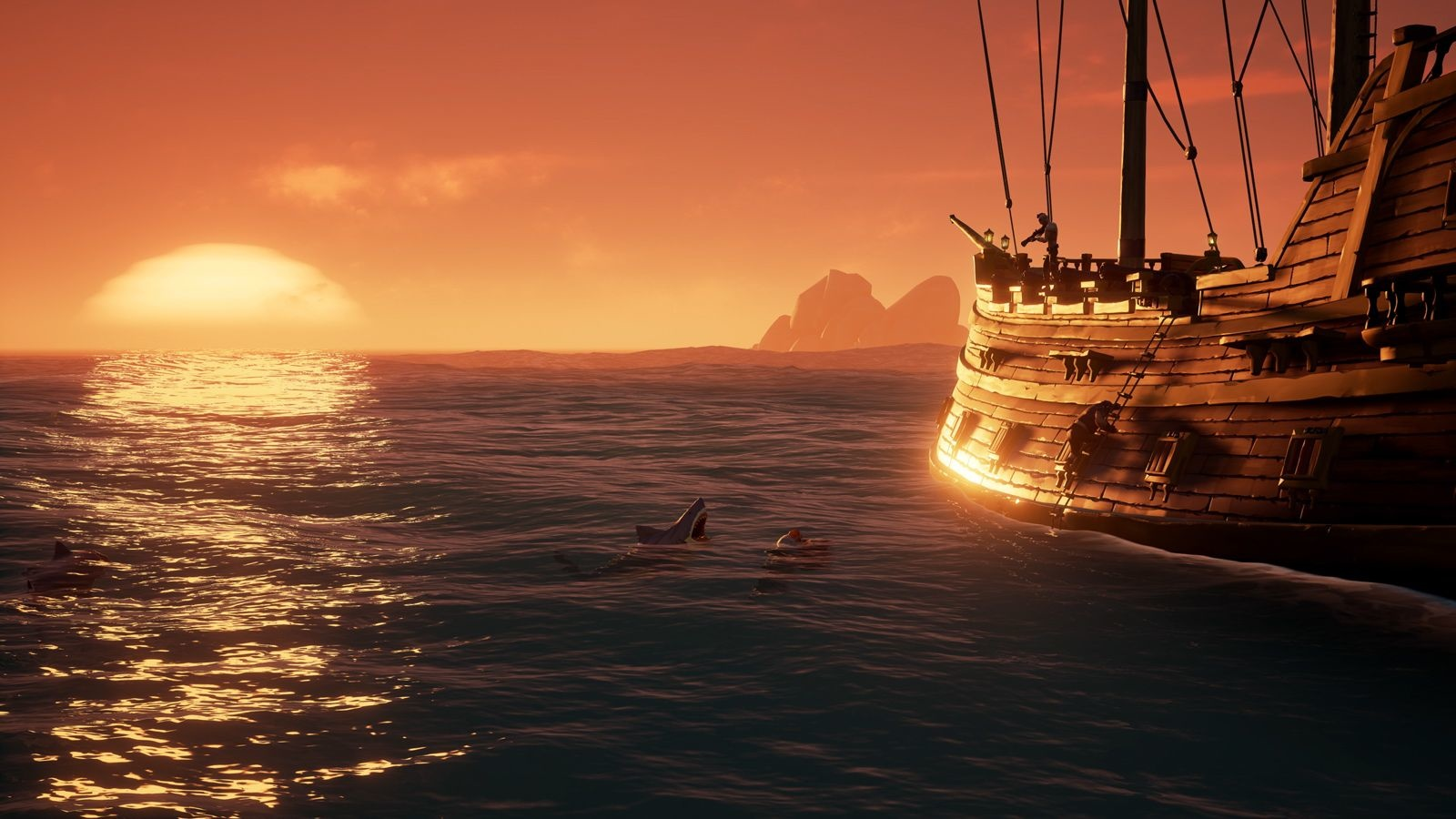 This is not everything. With the recent anniversary updates and the following monthly updates that have been released, it’s very easy to say this game is a lot of fun. This isn’t everything, there’s still more to mention, such as; The Devils Roar, Different Sized Ships, Different Voyage Variants, Pets, Cosmetics (ship, weapons and pirate), Emissaries, and the special Fort of The Damned. As you can see, you will never have anything to do in this game!